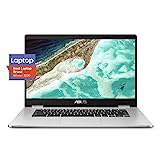 Chromebooks are around for a long time already but they are not so common. Because of that, the question gets raised: are they good? Who are they good for? And which quad-core models are the best? Keep reading to know about all that.

What are the pros and cons of Chromebooks?

Let’s start from the beginning. Chromebooks have some advantages over other computers, but they can have some disadvantages as well.

The first great advantage is that Chromebooks are cheaper than most computers. The reason for that is the Chrome OS.

Computers that don’t have Windows or macOS preinstalled usually are cheaper while you still get powerful hardware. The same applies to other Chrome devices.

Chrome OS also is very fast and stable. That way, it is a great option if you don’t want to get stuck with Window’s buggy system and bloatware but can’t afford an Apple machine.

Because you are getting a less used OS, there is less chance you will catch viruses. In case you don’t know, most PC viruses are designed for Windows since it is the most used OS.

Still talking about the OS, it has great integration with Google Workspace and also works wonders with browser-based apps, be they to help you work or for entertainment.

As for physical characteristics, you can expect lightweight machines with long battery life.

These laptops are not made for gamers as you already figured out by now, but for people who need a fast-paced machine for the daily routine of working and studying. So, being light is great for carrying around.

Now, on the side of cons, some stuff is already obvious. Since you are not using Windows, plenty of software will not be available.

You can’t install Microsoft Word, for example, only being able to use the online version of Microsoft 365. Read more about this at Chromebooks For Excel.

Chromebooks also are not optimal for editing images and videos. Some things can be done on them, but don’t expect to have the best performance with Photoshop, DaVinci Resolve, and other similar applications. You can use Lightroom on a Chromebook instead.

Since the Chrome OS is designed for working online, you won’t be able to do much when you don’t have a connection to the internet.

Doing so would require you some planning before. People living in places where internet connection isn’t reliable won’t find a Chromebook to be the best option.

If you buy a Chromebook, you should be aware that you won’t be able to play many games. The system isn’t built for that, plus most games are designed to be played on macOS and Windows (but mostly Windows).

What are quad-core Chromebooks good for?

Quad-core is somewhat the standard for today’s processors that are worth buying. That being said, getting a Chromebook with a quad-core processor will be enough for any of your activities.

Sure, don’t expect to get a processor with multi-threading, as those are available on more recent and powerful computer models that are used for gaming and working with heavy software.

“Quad-core” is a vague concept since even powerful Intel Core i7 processors are quad-core. On a Chromebook, you should expect to get an AMD Ryzen 3 3350U, Pentium Silver N5000, MT8173C, etc. Some models, though, such as the Pixelbook develop by Google, have top-notch hardware.

Since you are getting this type of laptop, you probably plan to use it for studying (reading PDFs, writing, watching lectures live or recorded) or work (writing, organizing spreadsheets, sending emails, etc.).

The hardware you can get with most Chromebooks is enough for all that.

In this part of the article, we will take a look at three of the best Chromebooks in the market right now.

We shall try to address different needs, so we will first examine some powerful models and then cheaper options for people who don’t need that much power.

Acer Chromebook Spin 713 encompasses a whole series of laptops with varying configurations. On the best version, you can get Intel Core i7-10510U with 1TB of SSD storage.

That is only the tip of the iceberg, though. Some versions of this machine, such as the one we will link you to, feature a touchscreen display.

That way, this laptop is perfect for visual artists that need a laptop that is easy to carry around. Its 13,5″ display makes it lightweight and you can put it on your backpack to go anywhere without feeling back pains.

One rare thing to see on a Chromebook is an HDMI port, but Spin 713 has it. This is ideal if you use your computer to prepare presentations and then you want to show the presentation right out of your machine.

This is a rather new laptop and its price seems to encourage few people to buy it. Still, the 15 people who rated it on Amazon rated it as 5 stars out of 5.

The ASUS Chromebook C523 is less powerful than the Acer model featured above, but it has some advantages in comparison. If you like a bigger screen, that’s where the pros start for you.

To be sure, this model isn’t suited for heavy, demanding software. If you are a visual artist, work with video editing, or any other thing that requires powerful hardware, ASUS Chromebook C523 isn’t for you.

On the other hand, this laptop falls in the category of what was already described in the section above. If your study and work involve only light software, then a laptop such as this one is perfect.

Its specs wouldn’t make it a great computer if it had Windows installed since Windows isn’t very optimized. The Chrome OS, on the other hand, makes the most out of cheap machines.

This laptop received 179 ratings from buyers on Amazon, and it has an average rating of 4.4 stars out of 5.

This is probably the most opinion-divider laptop we will present to you in this article. It has acceptable hardware considering it is a small Chromebook made for work, study and occasionally watching shows on streaming services.

But then, the fact that its display is small might drive some people away from it.

One of the guarantees with this laptop is the fact that it is made by Lenovo and is a 2021 model. In other words, it has fresh hardware put together by a company that is known to deliver great machines.

In terms of carrying around, you won’t even feel its weight since it is so small. You can easily slip it into your bag or backpack.

If your work involves mostly writing, taking notes, etc., a Chromebook such as this one will prove a great ally.

We checked 28 reviews on Amazon. On average, buyers seem very satisfied, as they rate the laptop with 4.7 out of 5 stars.

If you didn’t know much about Chromebooks, now you know they are perky laptops designed for people who don’t need almighty machines to play games, develop software, edit videos, etc.

Still, in this article, we tried to recommend one powerful Chromebook and then two options for those who only need to perform the most basic tasks. The staff pick would, of course, be the Acer Chromebook Spin 713 due to its powerful hardware.

Tags:Chromebook
previousAre Chromebooks good for Content Creators?
nextCan You Use Zwift on a Chromebook?