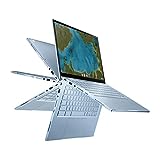 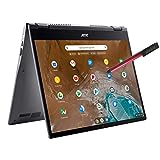 Chromebooks are not known for their gaming capabilities or breathtaking graphics, but the future looks different. In mid-2020, Nvidia and Google announced that the former’s trailblazing GeForce service will now be available to Chromebook players.

And while a cloud gaming platform sounds like a great match for a line of devices that primarily runs on cloud-based applications, many players don’t understand how exactly the gaming experience will work.

So, we’ve broken everything down into simple terms and also highlighted the three best Chromebook models that we think are well-suited to run GeForce.

Is GeForce NOW Good on Chromebook?

In a post on their official blog dated August 18, 2020,  Nvidia announced that Chromebook users can play all their favorite PC games through the GeForce NOW web portal.

As you would expect, users had to deal with a range of “teething problems” like slow loading times and constant crashes in the first several months.

GeForce NOW is optimized to run on most Chromebook devices. Models with enhanced trackpads, RAM capacity, and displays will naturally be better to play on than the lower-end devices.

How to Make GeForce Run Better on Chromebook?

The first step to making GeForce games run better on your Chromebook is to ensure you get a model with enough power. Your Chromebook’s hardware features will define, to a large extent, how your gaming experience will turn out.

According to Nvidia, your device needs to meet the following requirements to be able to run most of the games on GeForce without lags:

That said, there are several other things you can do to make your gaming experience faster, more convenient, and enjoyable. These include:

Heavy games like World of Warcraft and Fortnite are among the most intensive games in the GeForce NOW platform and in all honesty, won’t run well on most low-end Chromebooks.

For one, the game runs best on devices with at least 8GB of RAM and a 13-inch display. It can still run on 4GB models, but then the gameplay quality may be severely compromised.

To give you a clue about the type of Chromebook you need to be looking at if you are a Fortnite fan, check out the following review of 3 of the best Chromebooks to play the game on:

As we’ve said, large system memory and screen are key to running Fortnite without issues. The ASUS C433 Flip delivers in both aspects and beyond.

For starters, it comes with 8GB of memory, and a 14-inch FHD Touchscreen. These, coupled with the 64GB SSD storage and Intel UHD Graphics card, means you can play the game not only without lags but also with the best views of the action.

Additional features include a 360° flip-and-fold design that allows you to turn the device into a tablet if you want to. There’s also an additional headphone/microphone jack port for when you need to use a headset and an LED-backlit keyboard.

ASUS  Flip C433 is highly rated on Amazon and ASUS, with buyers particularly enthralled by its remarkable hardware features. Here are some of the things users have to say about the machine:

The Screen is Everything

A lot of buyers were happy with the  FHD screen, which allowed them crystal clear views of everything in the working space. When playing Fortnite on the ASUS Flip C433, expect to see even the most minor details, like your 20th opponent joining the field.

The Performance Aspect is Exemplary

It is rare to find a Chromebook with 8GB of RAM or more, and buyers—a lot of whom had used other Chromebooks before—were full of praises for the fast processing speed the laptop afforded them, even when running multiple programs at once.

The Spin 713 is arguably Acer’s greatest Chromebook model and it is also surprisingly affordable, which explains its popularity among buyers on both Amazon and Best Buy.

The device is great for Fortnite because it has 8GB RAM, 128GB SSD, and Core i5 specifications.

Admittedly, the screen is a bit on the smaller side, but it’s a worthy compromise in exchange for the considerable processing power. Matter of fact, the screen produces high-quality displays (2K video and 2256 x 1504 resolution).

It also has a remarkably long battery life of 10 hours and a 360° hinge for easy flipping.

Last but not least, the device comes with an advanced Intel Wi-Fi 6 network card that assures you of a super-fast connection as long as your Wi-Fi is strong enough.

The Acer Spin 713 Chromebook has an average rating of 4.5 on Amazon and 4.6 on Best Buy, which means a majority of buyers love it. A lot of the reviewers were of the opinion that:

The Display Quality is Breathtaking

Many reviews mention the amazing screen quality, with a lot of buyers being particularly impressed by the 4K support. Of course, even the normal 2K resolution is good enough to provide an enjoyable Fortnite gaming experience.

The RAM is Well-Suited For Gaming

Several customers noted that the Acer Spin 713 is incredibly fast, courtesy of its powerful 8GB RAM chip. The chip gives the device enough power to run split-screen games and even the most intensive action games.

Pixelbook Go is basically the smaller and more affordable version of the trailblazing Google Pixelbook .

It has a 13.3-inch screen that can comfortably give a 1920 x 1080 resolution. Its system memory is the standard 8GB while the hard drive has a 64GB capacity.

The average battery life is 12 hours and the keyboard—which is remarkably large—is backlit and fitted with Hush Keys. Most importantly, the Pixelbook Go has an EPEAT certification, which basically means it is produced using eco-friendly materials.

We checked out the review sections on Amazon and Walmart, where the Google Pixelbook Go is primarily sold, and found over 1,000 reviews. The device had an average user rating of 4.5 stars. The features that received the highest praise were:

A lot of the buyers were blown away by the fact that they could use their Pixelbook Go Chromebooks for more than 10 hours without plugging in.

Of course, Fortnite will drain the battery quite fast but you can still be assured of at least 8 hours of uninterrupted gameplay with this machine.

Weighing only 2.3 pounds, the Pixelbook Go is easily one of the lightest laptops to carry around, as the customers duly noted. This, and the fact that you don’t need to carry a charger when leaving your house, make the Pixelbook Go an amazing laptop to have on the go!

There goes our carefully curated list of the best Chromebooks to play GeForce games on. Whichever model you choose, you can rest assured that the user experience will be amazing and (mostly) stress-free.

But in case you want to know; our best pick was the Google Pixelbook Chrome as it has everything you would expect on a mid-range Chromebook. From a decent screen resolution to fairly long battery life to an extremely portable build. Buy one today and let us know your experience!