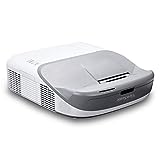 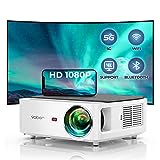 Most people prefer to watch their movies and shows on a bigger screen than a TV. And now that going to a movie theater isn’t an option, you really need a projector to create the cinematic experience at home.

If you’re considering buying a projector, you should make sure it comes with horizontal keystone functionality, especially if you live in a small apartment. Otherwise, you might be disappointed on movie night.

This guide will tell you all about the horizontal keystone in projectors and introduce some of the best options on the market.

What is Horizontal Keystone?

A horizontal keystone is a digital image adjustment that corrects distortions on the screen’s right or left side. These distortions give the image a trapezoidal shape rather than an even rectangle.

They usually happen because the image is projected onto an angled surface or the projector is too close to or not aligned with the screen’s center.

Unlike vertical keystone, you usually can’t correct horizontal misalignments by moving or tilting the projector because your room may not be large enough to distance the projector from the screen.

That’s why you need a projector with horizontal keystone.

What Does Keystone Mean on a Projector?

Keystone or keystone correction on a projector means the device can adjust skewed images by manipulating the output image so that you don’t have to change the projector’s position.

If your projector supports horizontal keystone correction, you can usually access the feature through a dedicated button on the console or a tab in the pop-up menu.

Once activated, the projector automatically detects distortions on the sides and alters the image to create a uniform rectangle.

Note that keystone correction is different from lens shift, although both techniques produce even rectangular images.

Essentially, keystone correction involves digitally manipulating the output image while lens shift moves the projector lens to center it on the screen.

Keystone reduces picture quality. As a digital modification, it uses scaling and compression techniques to create an even picture. The two processes can take their toll on image resolution or create digital artifacts and blur the edges.

However, as you get into a higher price range, the modification techniques become more sophisticated, and you experience less quality loss.

How to Fix Horizontal Keystone

To fix the horizontal keystone, you can either displace the projector or use a digital adjustment technique.

If you decide to fix the issue manually, make sure the projector is perpendicular to the surface’s center.

If that’s not possible, you can also rotate the projector to the left or right, depending on the distorted side, until the trapezoidal image turns rectangular.

On the other hand, a digital adjustment involves using the keystone function and doesn’t require any physical effort on your side.

All you need is to buy a quality projector with a horizontal keystone and the right features.

Can You Put a Projector in the Corner?

You can put your projector in the corner, but only if it comes with horizontal lens shift or a keystone function. Otherwise, one side of the picture will seem wider than the other, creating a keystone effect.

Keystone function will also help you easily point your projector to the ceiling. This can be fun and smart option for smaller rooms.

This projector is great for horizontal and vertical keystoning.

The ViewSonic PS700X is an HD projector with incredible 3,300 lumens in color brightness.

Distancing maximum projection size from 100 inches to 200 inches, the PS700X is perfect for home and commercial settings like restaurants, conference rooms, and classrooms.

The projector supports inputs such as HDMI, USB-B device input, or VGA ExpressCard and can be connected directly to a computer without using an additional capture card.

The dynamic Eco Mode allows the lamp to shine bright while lasting up to 7,500 hours.

With a business class design that’s perfect for classroom environments or board rooms, its programmable keystone correction helps you create the sharpest images possible in your presentations.

With a full HD 1920×1080 resolution, this projector brings you a home theatre experience. The brightness level reaches 7500 lumens, resisting your room’s ambient light. So, the darkest scenes remain visible in different lighting conditions, even outdoors.

The projector has a 4-point keystone correction feature that not only corrects the image horizontally and vertically but also lets you adjust all four image corners.

It also allows growing and shrinking the image. So, you can mount or place the device anywhere you like. 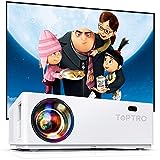 When it comes to price/feature ratio, it’s hard to beat the TOPTRO TR81.

It squares the screen both vertically and horizontally, at ±50 degrees. Besides, the built zoom function lets you convert the display size from 100 down to 75 percent.

This projector creates a gigantic image up to 350 inches, giving you a theater-like experience. Coupled with a light-footed,16ms response range, it’s also a great choice for PC and PS gamers.

TOPTRO TR81 has a lens of 7000 lumens to ensure a crystal-clear picture in the brightest settings. And the 1080P resolution means you’ll see a sharp, detailed, full-HD image.

The mid-sized gadget offers a wide range of connectivity options, including HDMI, SDHC, USB, AV, VGA, and SD card slots. So, you can pair this device with any screen-based or memory device.

Having a 100,000-hours bulb life, this projector gives the full value of your money, not to mention the rigid shell and dust filter inside it. What’s even more exciting, the company commits to repair the lamp for free in this period.

At a 1.2:1 projection ratio, it can reflect images as wide as 76-inch, provided that you keep it around 7 feet away from the screen.

What’s more, the 40-degree keystone (both vertical and horizontal) makes sure you won’t have an unbalanced image. 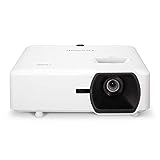 It’s equipped with a 5,000-lumen light source to produce high brightness levels. So, if you need a projector for an auditorium, gallery, or conference hall, this one’s for you.

The device can tilt 360 degrees so you can place it anywhere, at any angle, without worrying about image distortion.

At the same time, the four-corner adjustment allows you to correct both horizontal and vertical keystone. 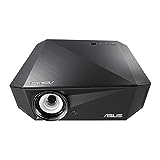 The ASUS F1 is another excellent projector with keystone correction. However, the correction only works horizontally. When coupled with autofocus, this feature can turn your output into a well-shaped rectangle.

The short-throw lens is another outstanding feature, allowing you to display a large picture from a short distance. That’s why this projector is best for apartment owners.

Keystone functionality digitally modifies the projector image to create an even rectangle. Horizontal keystone produces a more uniform image by manipulating its sides.

Most budget projectors don’t come with a horizontal keystone. To get the feature, you need to go upwards.

In this review, YABBER V6 is the best projector with this capability. It not only gives you full keystone functionality but also offers a Hi-Def picture with natural colors. It’s a high-quality, durable device that you can use with various devices.

If you’re looking for a small projector that connects seamlessly with your iPhone, check out our list of top 3 mini projectors for iPhone.