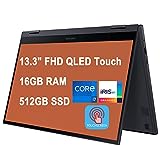 Samsung is now mostly associated with utility electronics like phones, fridges, and smart TVs, but the company was actually one of the early manufacturers of computers. Nevertheless, it still produces some great PCs, a case in point being the wildly popular Samsung Galaxy Books series.

In this review, we are going to dig deep inside Samsung’s laptop portfolio and highlight the best models to buy if you’re involved in video editing.

Like any other brand, Samsung laptops are made for different purposes. There are models that have more advanced specs that can handle intense video editing sessions while other models can only handle basic tasks.

Apart from having relatively powerful processors, Samsung laptops have some of the best displays in the market. In fact, the first-ever 27-inch gaming monitor—which was in QHD no less—was developed by Samsung, as was the first UHD 15.6” OLED display.

And as you will see with the models highlighted below, this commitment to cutting-edge screen technology remains as strong as ever. For a video editor, the value of a great display cannot be understated.

Samsung was also one of the pioneers of fast-charging batteries and portable battery pack charging technology and the recent laptop and notebook models have some amazing batteries.

And while a great battery may not matter much if you work indoors within touching distance of a socket, it may come in very handy when you receive some urgent jobs while on the go.

All said, it is worth noting that good Samsung laptops are quite expensive relative to equivalent models by other manufacturers.

This is often one of the main criticisms levied against the company. And as much as the computers are themselves highly rated, it is only advisable to buy if you work in a professional capacity.

What to Look for When Buying a Laptop For Video Editing

When shopping for a laptop for video editing, you need to pay more attention to its hardware specs. Some of the key features in this regard include:

It goes without saying that the more powerful your laptop’s CPU is, the more you can do with it. Of course, it all depends on the type of videos you work with. If you mostly do 1080p and below, you can get a device with about six cores and eight threads.

However, if you intend to work on higher resolutions, like 4K, 6K, or 8K you need stronger processors – ones with at least seven cores and twelve threads.

The best video editing laptops have SSD storage as the technology allows super-fast retrieval of data, which subsequently allows you to play back your edits with minimal frame drops.

The ideal storage size is 1TB, but if you’re on a budget, you can buy a model with less size and then get an external SSD drive instead.

Basically, the more RAM a laptop has, the more suitable it is for editing videos. Ideally, look for a 32GB device, although anything above 16GB is still fine.

The size and resolution of your laptop’s screen determine how much detail you can see while editing, and consequently the quality of the final video. You should go for at least 14.3 inch displays that offer UHD resolution at the minimum.

Now that you have an idea of what you need to be looking at, here’s our top 3 Samsung laptops for video editors:

If you’re looking for an affordable laptop to do your tasks on, then look no further than Samsung Galaxy Chromebook.

The unit, which comes in a distinct fiesta red color, is not only the best Chromebook in Samsung’s portfolio but also one of the best laptops in the market. It looks amazing, packs some decent power, and has a 4K screen, which is priceless for a video editor.

The Samsung Chromebook is rated 4.2 stars on both Amazon and Best Buy so you can bet a lot of people love it. The features that were most highly rated are:

Although it’s not as large as most video editors would like, the Chromebook’s monitor has a maximum resolution of 3840 x 2160 pixels, which is basically 4K. And a noteworthy number of users made it clear that this was their favorite feature.

A lot of users praised the super-thin body on the Chromebook and registered their pleasure at how light it felt on both their laps and in their backpacks.

The Galaxy Book Pro Intel Evo Platform is simply one of the best laptops in the market, and is more than capable of handling multithreaded video editing tasks.

Some of its key features include:

We looked up the device’s sales pages on Amazon and Best Buy and found over 120 reviews. According to users, the most noteworthy features are:

Almost every person who reviewed the Evo Platform praised its incredible screen quality. And indeed, the AMOLED, 1920×1080, 60Hz display on this baby is one of the best in the market.

Some tech-savvy customers were seemingly awed by how fast and powerful the laptop is, even when playing intense games. You can count on it running your Adobe Premiere Pro for hours on end without overheating.

The Galaxy Book Flex2 Alpha is the latest Samsung laptop to have a QLED screen, a technology that Samsung pioneered, and which first appeared on the Galaxy Book Ion. Although the screen is a bit smaller, you will undoubtedly notice the crispy clear images and colors it produces.

The Flex2 Alpha also has a fast processor (max speed of 4.7 GHz) and you can choose between 512GB, 1TB, and 2TB options.

The Samsung Galaxy Book Flex2 Alpha is rated 4.6 and 4.7 stars by buyers on Amazon and on the Samsung store, respectively. Here’s a summary of the reviews:

Some reviewers were openly fawning over the speed of the Flxex2 Alpha’s processor even when under pressure. But then again, that’s what you get from an 11th Gen CPU with 8 threads.

The laptop’s 1920×1080 FHD, QLED Touchscreen display impressed a lot of customers, and will definitely impress the video editors out there who deal with 4K videos.

Which is better for video editing, desktop or laptop?

In general, desktops are much better suited for video editing work compared to laptops for the following reasons:

Which brand of laptop is best for video editing?

With video editing being more of a niche than a mainstream career, major PC makers don’t make any laptops specifically for video editors as they do for gamers and students.

It is hard to say which brand makes the best laptops in this regard. The key is to identify the features you want in a laptop then go out and look for a machine that matches them, irrespective of the brand name.

Which laptop is best for 4K video editing?

Again, there is no laptop made specifically for 4K video editing in the market. But generally speaking, any laptop with at least 32GB of RAM, 512GB of SSD storage, a 2.9GHz processor, and a UHD screen can handle the rigors of editing 4K videos.

Yes. You can edit 4K videos on any laptop with a 1080p resolution screen, provided the processor’s speed and storage capacity is adequate. Remember, the video editing experience is mostly determined by the computer’s hardware capabilities and not the screen resolution. Nonetheless, you will not be able to view your edited 4K videos on a 1080p monitor.

Samsung laptops are some of the best in the market and you can never go wrong with one, especially if it’s a high-end model. All 3 devices we’ve reviewed are well suited to handle a wide range of video editing projects, and you can also use them to play games or watch movies.

Our favorite is the Galaxy Book Pro Intel Evo Platform. It is super light, has an amazing 15.6” AMOLED screen, and a processor that doesn’t even come close to bucking under pressure. The storage is also not too shabby either and is very expandable.