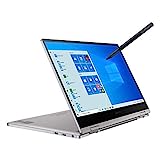 View on Amazon
View on Walmart

If you’re a college student, you probably want a laptop that makes it easier and convenient to do schoolwork—write essays and research, access online resources, attend Zoom classes, etc. You may also want to use your laptop to play games and watch movies during your free time.

But with so many great choices, finding the right laptop may be even more challenging than completing a term paper.

Don’t worry though, as we’ll be telling you exactly how to go about it and also tell you the 3 best Samsung laptops for students.

Is Samsung Laptop good for students?

Yes. Most Samsung laptop models are capable of handling the rigors of academic work and beyond. Their impeccable designs, strong processors, wonderful screens, and most importantly, their high battery capacities make Samsung laptops great for students.

What more, there are lots of 2-in-1 models to choose from in case you are also looking for tablet functionality.

As a student, you want a laptop that is light enough to carry in a standard backpack and that has at least 4GB of RAM and an Intel dual core processor or better.

The good news is that a majority of Samsung laptops in the market surpass these requirements.

Samsung also offers some long warranties on their computers and has exceptional customer care.

The long warranty periods show that the company is fairly confident in their products, which are quite durable as anyone who has ever had a Samsung device would tell you.

The only thing that may discourage most students from buying a Samsung laptop is the high prices.

Fortunately, the company seems to have heard these criticisms and has recently begun to work on budget models and Chromebooks.

We made sure to include one of the affordable Chromebooks in our review below so be sure to check that out if you’re looking for a budget laptop.

What Are The Pros of Samsung Laptops?

Some of the benefits of owning a Samsung laptop include:

What are the downsides of Samsung Laptops?

Despite having a great reputation as a keystone electronics manufacturer, Samsung’s laptop franchise is not as popular as it should be due to a few factors.

Yes. 8GB is enough to support and seamlessly run all the programs that college students would need to run. This includes both the basic ones like Chrome and Word and the more intense ones like SolidWorks and virtual design apps.

Matter of fact, you can even play games for hours on end on 8GB without any significant problems.

We did a small tour on Amazon and other stores and uncovered several amazing devices that would catch a typical college student’s fancy. We included one device for each of the high end, mid range and low end categories.

The Notebook 9 Pro is arguably the pinnacle of the Samsung PC revolution. And while it comes in several formats, the Base Model’s screen is 13.3”.

The 2-in-1 device effortlessly combines power and style in a remarkably small and lightweight build. It is arguably the most classy laptop a college student can buy.

The Notebook 9 Pro has hundreds of positive reviews on its Amazon and Samsung Store sales pages. Most of the reviews touch on two aspects:

This Notebook 9 Pro is not only priced as a deluxe device, but its sheer power also matches those of the most elite Notebooks. A number of users noted how quiet the device remains even when performing multi-thread activities.

While not exactly the biggest, the Notebook 9 Pro’s screen received a lot of love in the reviews, mostly because of its touchscreen – which makes it easier to select things – and also due to its FHD resolution.

If you like clamshell laptops, you will definitely enjoy the Samsung Galaxy Book Pro laptop, which is built on the novel Intel Evo Platform. The device  has a great combination of portability, performance, aesthetics and battery life. Here is a complete list of features:

There are over 100 reviews on the Amazon page and 27 on the official Samsung store (average rating 4.6 stars) for this device and here’s our main takeaways:

Some reviewers, probably students, were very satisfied with the laptop’s negligible weight and the fact that it can easily fit in a typical school or work bag – the 13.3” model anyway.

The Screen is Excellent

Samsung are the undisputed kings of screen technology and on the Galaxy Book Pro Intel Evo, they did not disappoint. Many users praised the image and graphics quality the AMOLED screen produces and no doubt you will like it too.

If you’re just looking for a laptop to do your assignments and browse on, the Samsung Galaxy Chromebook 4 should be in your sights. It not only costs less than a decent smartphone, but also offers as much functionality as any high end Chromebook. It’s features include:

We checked out what users of this device, both on Amazon and Walmart had to say, and we were not surprised that they rated it very highly. The two features that got the most love were:

The 4GB Intel Celeron Processor may be weaker when compared to ordinary laptop processors, but it can seamlessly run both Chrome and Linux apps.

Many users registered their satisfaction with the long life of the device’s battery, even when connected to the net. You can basically go through an entire school day on a single charge.

What Laptop Do Most College Students Use?

While no study has been formally carried out to determine this, the Google Pixelbook Go is undoubtedly a highly popular laptop among students. As the name suggests, Go is the larger yet cheaper successor of the revolutionary Google Pixelbook, which is widely regarded as the best Chromebook of all time.

Pixelbook Go’s popularity comes from both its fair price and mouthwatering features list, which includes a 4K display capability and a Core i7 processor, which makes it faster than the original Pixelbook.

It is also easy to carry around, weighing a paltry 2.3 pounds and has a battery that can last for 14 hours.

What is the Best Alternative for Students?

The best alternative laptop model for students is the Apple MacBook Air. It is incredibly fast and has a durable battery. Most importantly, it comes with the trailblazing M1 chip, which makes your image processing and video editing tasks much easier.

Additionally, the MacBook Air doesn’t come with any fans, which makes it incredulously quiet.

Having seen our top picks, the final decision on what model to buy now rests on you. And just as a pointer, be sure to check the battery life, screen size, weight, and processing speed of any laptop you wish to buy and how they all fit in the overall context of your coursework.

Nonetheless, our best pick is the Samsung Notebook 9 Pro as it ticks all our boxes. It is stylish, powerful, flexible, and adorably compact enough for both school and personal use.