The Apple Magic Keyboard is hands down the best wireless keyboard in the market. It is especially popular among users who write a lot.

Mechanical keyboards, on the other hand, have always been popular with the gaming crowd.

If you can’t figure out the difference between the two, then worry not. This post makes that distinction and highlights all you need to know about Apple Magic Keyboards.

No, the Apple Magic is a scissor-switch keyboard. These differ from mechanical keyboards in many ways, with the main difference being the contact mechanisms.

In scissor-switch keyboards, the lever is in the shape of a double-headed scissor or an X.  When pressed, the X gets flattened and its pivot point, which is the actuation point, presses into the sensor.

If the key is pressed hard enough, the keystroke is activated.

Mechanical keyboards, on the other hand, use spring contact mechanisms that push the corresponding sensor on the motherboard’s PCB when pressed.

The springs make them much noisier than the scissor-switch keyboards, whose actuation mechanisms are made of rubber.

Does Apple Have Mechanical Keyboards?

No, Apple doesn’t currently make mechanical keyboards. Its laptop and external keyboards are either butterfly or scissor-switch types, which as we said earlier, are not mechanical.

What Is So Special About The Apple Magic Keyboard?

For people who use multiple Apple devices, the Magic Keyboard’s seamless inter-connectivity across the devices will be much appreciated.

Its low noise level, made possible by the use of rubber domes as opposed to plastic ones, is also remarkable.

The most important feature of the magic keyboard is probably the ultra long-lasting battery.

Depending on how much you use the keyboard, the battery can stay up to a month between charges. This is much longer than you get with any other external keyboard, including the gaming types.

Is The Macbook Pro Keyboard Mechanical?

No. Apple doesn’t produce mechanical keyboards. In MacBook Pros, the keyboard type depends on the year of make.

For instance, most devices made before 2016 have scissor-switch keyboards that are similar to the Magic Keyboard.

MacBooks made post-2016, on the other hand, come with the traditional “butterfly” keyboards. Apple adopted these models mainly because they could be made thinner and larger than the scissor-switch types.

They also provide less key travel – 0.5mm in general – compared to other keyboard types, which range between 1 and 1.5 mm.

Nonetheless, Apple ditched the Butterfly keyboards in 2019, and most MacBook Pros made after 2020 have the Magic Keyboard.

Is The Apple Magic Keyboard Good For Typing?

They are sleek and quiet – making them suitable for use in public places – and are made of nylon and aluminum, which are easy on the fingers

Many people will also find the low-profile keys to be comfortable on the wrist.

However, the standard version doesn’t come with a backlight or numeric keypad, which can be trifling for some people.

According to a  Wall Street Journal experiment, the Magic Keyboard is arguably the second quietest keyboard type in the market.

In the test, 7 keyboards that were marketed as “quiet” were used in an anechoic chamber. The sound of each keyboard was then measured using a decibel meter.

The latter is installed with the aptly named “hush keys” and was specifically designed to produce no noise. The third contender was the MacBook Pro keyboard, which produced 31.3 decibels.

All Apple keyboards made from 1977 to 1994, when the Apple Extended Keyboard II was discontinued, were mechanical.

This included the original Apple keyboard, known as Apple II, and other popular models like the Apple IIc and Macintosh Keyboard.

However, the Apple Extended II was arguably the most beloved keyboard ever made by Apple. At the time, it was the quietest mechanical keyboard in the market, and its off-white cream color made it look classy.

It was however expensive to manufacture, hence its production was stopped in 1994 when the AppleDesign keyboard took over.

If you are a gamer or are into old-school stuff, mechanical keyboards may be more appealing to you. Here are two of the options you may want to consider when you go shopping for one: 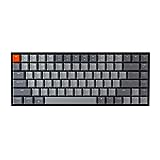 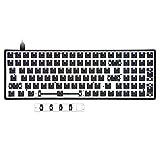 The Apple Magic keyboard is far from the best keyboard in the world but it feels amazing to type on.

Among its noteworthy features include instant Bluetooth pairing, compact size, and durable battery. It also has a fairly shallow keystroke, which allows you to type words with minimal effort.

If you use Apple devices, this is the best keyboard for you as it is compatible with both iPads and MacBooks. However, it may not be the most ideal choice if you have Windows or Android devices.

This is because it lacks programmable keys and some of the key functions are Apple-specific.