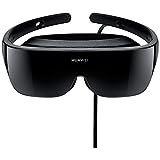 View on Amazon
View on Walmart

VR technology has come a long way since VR headsets were first introduced. Nowadays, VR headsets can connect to many different devices, including smartphones.

Samsung has developed a VR headset for its phones, and many phone VRs are compatible with iPhones, but what about the less popular brands like Huawei?

Read on to find out about the best VR headsets for Huawei fans.

Does Any VR Headset Work with Huawei?

Yes. It might come as a surprise, but the Chinese smartphone manufacturer, Huawei, has released not one but two VR headsets in the past few years.

The Huawei VR was first launched back in 2016 in Shanghai, China. It looked and worked much like the Samsung Gear, except that it accepted Huawei phones, including Huawei P9, P9 Plus, and Mate 8.

Then, in 2017, the company released the Huawei VR2. This headset doesn’t take phones inside like the traditional phone VR headsets.

Instead, you should connect your phone, tablet, or even a PC to the Huawei VR2 via a USB-C port.

This headset works with Huawei Mate 10, Mate RS series, and P20 series. The minimum requirements for the compatible PC are an Intel Core i5 CPU along with an NVIDIA GeForce GTX 1060 GPU.

With a PC connection, you can access the library of SteamVR games and apps.

Once you connect the VR2 to the proper device, it’ll provide a 3K resolution, 90HTZ refresh rate, and 360° DTS sound. It’s a very comfortable and light headset, and you can wear it over your glasses.

You probably haven’t heard of these headsets because none of the compatible Huawei phones are available in the US, and neither are the headsets.

However, if you can somehow get your hands on them, they’re the best choice around for Huawei smartphones.

Moreover, Huawei’s next-gen “VR Glass” Headset was launched in April 2021. It looks like it’ll be available for the US, and we’ll cover its specs in the following sections.

Lastly, many other phone VR headsets from different brands can fit and work with specific Huawei phone models.

The Samsung Gear VR can only fit some of the Samsung smartphones. Even the newest model of the Gear VR can’t fit the older phones. Plus, the Samsung Galaxy S21 range and other newer models aren’t compatible with the headset.

Here are the smartphones that the Samsung Gear VR can fit:

What to Look for When Buying VR Headsets for Huawei?

The most crucial factor is that the headset can fit your Huawei smartphone and is compatible with the software.

From then on, the process of choosing a good Huawei headset will be the same as choosing any other VR headset.

Consider the field of view, resolution, mic quality, headphone compatibility, quality of built, weight, comfort, price, and so on.

The new Huawei headset is like nothing we’ve seen in the VR world before. The first noticeable and significant difference is the shape of the headset. It looks like glasses, which are also foldable.

It’s only a third as thick as the other VR headsets and much lighter. Putting it on is as easy as putting on sunglasses. You’ll forget it’s there after a while!

The Huawei VR Glasses can work with both Huawei smartphones and a capable PC through a cable connection.

The small size of this product doesn’t take anything away from its functionality. It supports 3200×1600 or 3K resolution, with a pixel density of 1058ppi. It can handle the refresh rate of 70Hz in mobile mode and 90Hz in PC mode.

The Huawei Glass supports three and six degrees of freedom, with the inside-out positioning method.

But it currently comes with a matching handle that can handle 3DOF with a 360-degree joystick and side gesture buttons.

The integrated dual speakers have environment modeling and multi-channel sound. You can connect the glasses to 3.5mm external headphones or Bluetooth headphones. The glasses have a built-in mic, as well.

Its most thoughtful feature is that it lets myopic individuals adjust each lens according to their own visual acuity in a 0-700°diopter range.

If you have a Huawei Mate 9 Pro or a Huawei Porsche Design Mate 9 smartphone, the Google Daydream VR headset is made for you.

The headset is well-built, and it provides decent phone VR quality.

It comes with a hand controller that lets you control the games to an extent. The library of games and apps is limited compared to other VR headsets, but you still get to watch 360-degree YouTube videos or use the Google Street View.

Google Daydream could be a good starting point to the world of VR gaming.

The DESTEK V5 phone VR headset is compatible with a range of smartphones with 4.7-6.8 inches screen and a gyroscope for 360 VR.

This headset’s aspheric and anti-distortion lens surface provides sharp HD images and a 110° field of view.

The fit is relatively tight, but the headset is light and comfortable. It has a removable face pad made of ultra-soft washable, breathable fabric. Glass wearers can also use the DESTEK V5 effortlessly.

It comes with a remote controller that can connect to your phone via Bluetooth, but it offers limited features.

The Huawei VR2 headset is another gadget made by this Chinese smartphone manufacturer, competing with the high-end products on the market. It’s not a completely standalone headset, and it needs a connection to a smartphone or a PC.

Compatible phones for this headset are Huawei’s Mate 10, Mate RS, and the P20 series. You can access and use VR apps through your smartphone.

For running VR on a PC, you’ll need at least an Intel Core i5 processor and an Nvidia GeForce GTX 1060 graphics card or an equivalent. Connecting the headset to a PC allows you to access SteamVR for gaming.

You can also benefit from your own virtual movie theater with some help from IMAX. You’ll get 3K resolution with two LCDs and a resolution of 1,600 x 1,440 pixels per eye. Also, motion sickness and eye strain won’t be bothering you due to the headset’s 90Hz refresh rate. You’ll have an immersive experience when gaming or watching videos with the 360° DTS sound. You can also chat with your friends when gaming using the integrated mic.

The Huawei VR2 is very light and comfortable to wear, with the entire inside lined with and soft fabric and stuffed with plenty of cushioning. You can wear eyeglasses underneath the headset without it fogging or irritating your face.

The headset features a flip-up vision, allowing users to effortlessly change between virtual reality and the real world without taking the headset off.

Although Huawei isn’t as popular as Apple or Samsung in the US, their products have their own fans.

And since VR is becoming more and more intertwined with our lives, Huawei owners want their share of it.

All in all, the new Huawei VR glasses will solve their problem and let them have a head-start for entering the VR world.